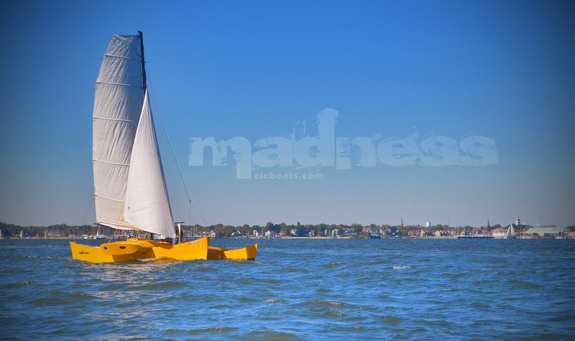 Back in May when I began looking for a first sailboat to build, I decided on the 15-foot PocketShip from CLC boats. As of today, that build is completed with the raising of the sails. We started out by building the 13 foot Mill Creek kayak, (also designed by CLC boats) in order to build up the skill and experience with CLC’s “stitch and glue” boat building technique.

But I never did mention that the boat that really got my attention was CLC boat’s 31 foot “Madness” proa. This boat very well might be the most beautiful looking boat I have ever seen. I knew that I was being a bit naive and optimistic, but I bought the plans for it the same time as those for PocketShip and MillCreek13.

Take a look for yourself:

It is a much longer boat (more than twice the length), but due to its light construction, it is probably only slightly heavier than the PocketShip. It is trailerable, but unlike PocketShip. it needs to be disassembled for trailering and reassembled for sailing.

And while I’ve read that PocketShip can cruise up about 5knots, I’ve seen numbers up to 20knots for Madness (depending on the wind, of course). It is a fast boat.

So… I had such a great time building PocketShip, I’ve gone ahead and ordered the materials to begin building Madness. I’m hoping that given the experience we’ve built up so far, we will have an even smoother time with Madness. But, one caution is that unlike PocketShip and MillCreek13, which are very popular builds and have extremely detailed and easy to follow step-by-step manuals, Madness comes with only the engineering drawings and limited comments. I think we are ready to take a crack at this build. If we can manage it, I will be very excited to take this boat out on the water.

So what is a proa? Well, boat designer John C. Harris explains it better than I ever could. Scroll down to “The Proa Rationale” on the Madness official page. But I think the simplest way to think of it is a large outrigger canoe with a sail. Unlike a catamaran which adds a bunch of engineering complexity by having the sail in the middle of two hulls, and each hull needs to be big and strong enough to support the weight of the entire boat under heavy wind conditions (when the other hull lifts from the water), the proa always keeps the smaller hull upwind. This allows the smaller hull to be much lighter, and simpler to build since it will never be pushed into the water to support the rest of the boat. It also allows the cross beams to be simpler since the mast will be nearly over the larger hull, so they won’t have all the torques that a symmetrical catamaran crossbeam needs to handle under heavy wind.

Perfect rationale for optimizing a multi-hull home built boat. And you might be asking “I’ve never heard of this… is this a new thing?” Well, it isn’t too common around marinas these days, but according to Wikipedia these were the first ocean-going ships to cross vast distances of water, allowing the Austronesian people to spread out from Taiwan into the Pacific and Indian oceans since at least 2200BC!

And given its unconventional asymmetric beauty, I’m hooked. More updates as the build progresses.